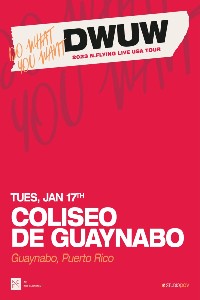 2023 N.Flying Live USA Tour DWUW: Do What You Want

2023 N.Flying Live USA Tour DWUW: Do What You Want

N.Flying; short for New Flying, which means 'new wings' or 'new escape', is a South Korean rap rock band formed by FNC Entertainment in 2013. The group released its first digital indie single "Basket" in Japan on October 1, 2013. The group marked its debut in Korea on May 20, 2015, with its first EP, including lead single 'Awesome'.

The group's agency, FNC, represents such artists as CN BLUE and FT Island, among others. N. Flying has won several prestigious awards in Korea, including Band of the Year in 2019.

Come join N. Flying in a night full of rock, rap and excitement.

Single Performance on Tuesday, January 17, 2023, at 8:00PM at the Mario Quijote Morales Coliseum in Guaynabo.

PRICE PER PERSON (Does not include IVU or C.S.):

Please take a look at the seating chart to select your seat, sales are final.

The dress code applies, no sort of pants, tank tops, or flip-flops.

We reserve the right of admission.